If you are self-isolating, please click here to find further resources and assemblies on our Remote Learning page.
Previous
Next
Menu
Home
Information
Curriculum
Parents 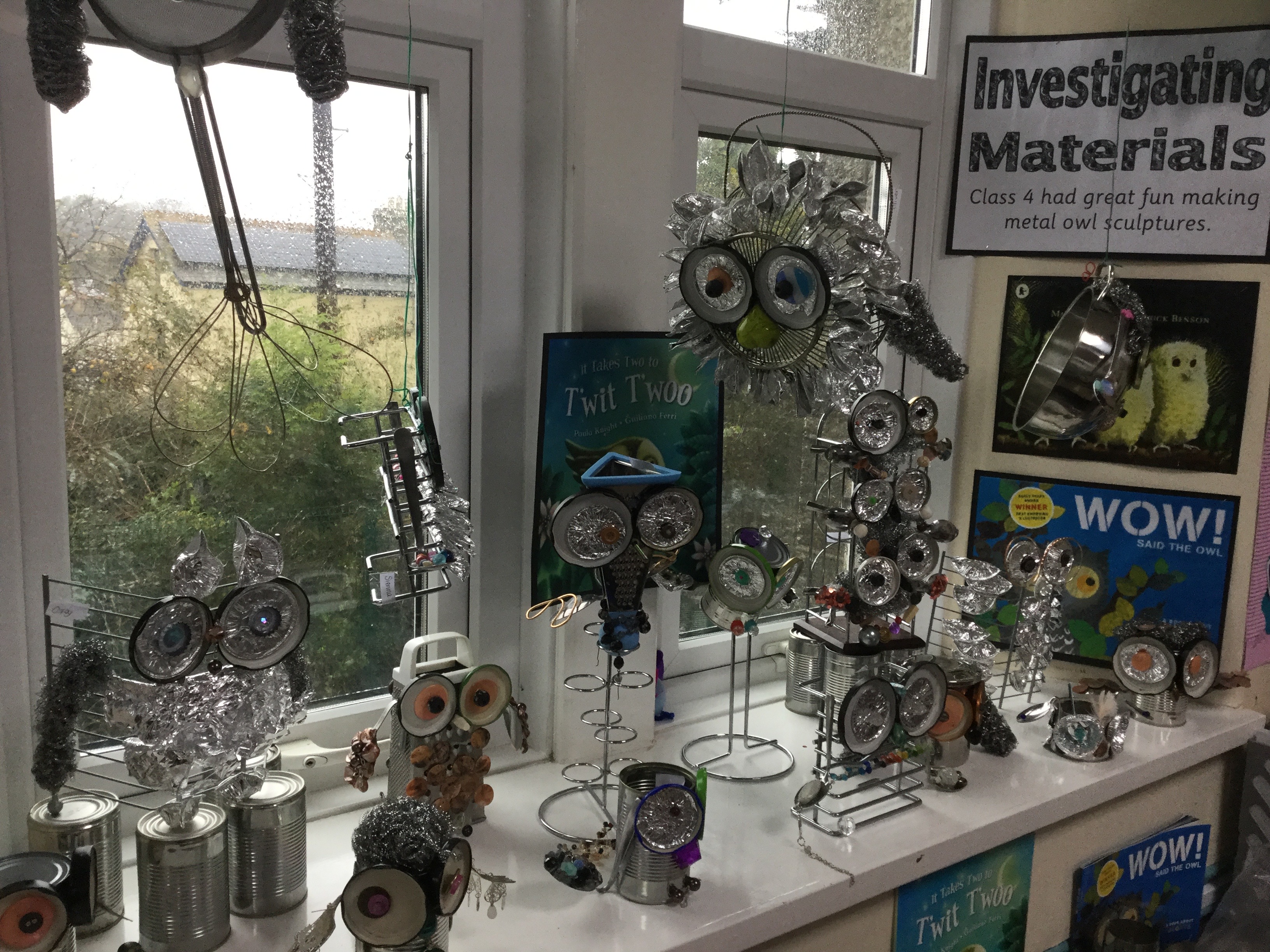 Class 4 love art! They have been having great fun investigating materials in their art lessons and have been making metal sculptures using everyday objects including cheese graters, cutlery, tin cans, mixing bowls and anything else they can get their hands on! Check out their fantastic owl creations!

I love the metal feather bits on your owl Lily. Can I help? – Alfie

Evie and Sienna are really happy with the way their owls are turning out. They are using jam jar lids for the eyes and sticking on squashed foil cases and beads. They’re looking great.

I like my owl. I want to take it home and show my mum. – Tyler

Ada and Flora help each other choose the best buttons and beads to stick on to the wings.

I love my owl. I brought in my sieve and my whisk from home and Mrs Anthoney helped me stick all the bits together. – Zak

I am really happy and so proud of the children. They put in a lot of hard work and were very creative. I think their owls look fantastic! – Miss Ryan 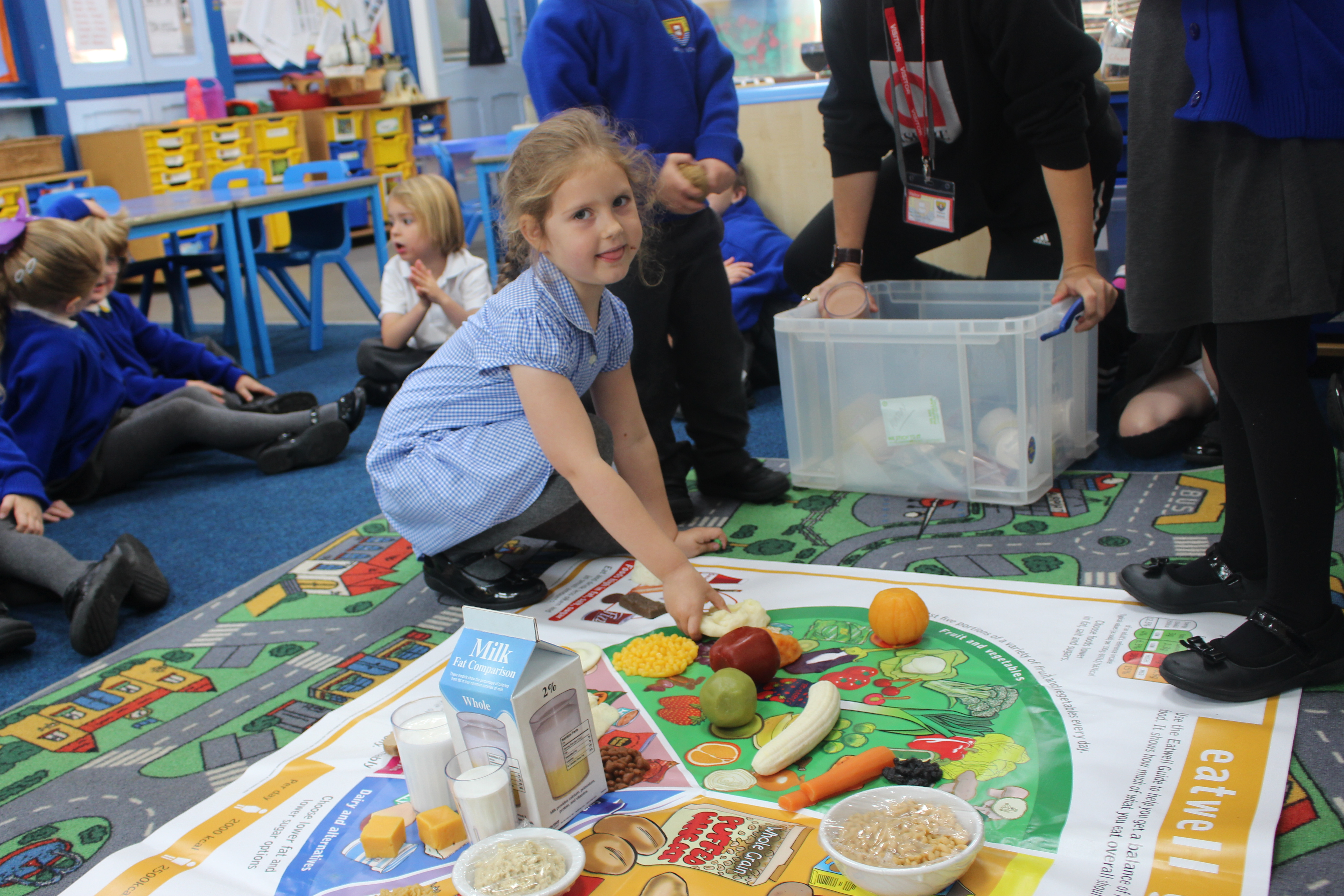 Isaac’s mum Kate, came in to talk to the children about healthy eating.

Class 1 learnt all about what a healthy plate looks like. We talked about all the different types of delicious fruits and vegetables we could eat daily and that we need to eat at least 5 different fruits and vegetable of different colours. Next we learnt all about what types of foods carbohydrates are and how they give us energy for the day. After that, we learnt which foods are proteins which give us strong muscles.

Next we learnt about dairy foods and how they are good for strong healthy teeth and bones. Then we learnt about how we should only eat a little fats and oils and leant that sugar is only an occasional treat, not an everyday food.

You have to eat five vegetables. I like cabbage and tomato sweetcorn and broccoli and baked beans – Atene

The children really enjoyed putting the different foods onto the correct section of the healthy food plate and we even had time to show how much energy we would have if we ate healthy and non healthy foods.

We have to eat pears and apples and carrots. We have to eat 5 fruit and vegetables everyday. I normally do that with fruits. We need to eat eggs and cheese – Evan 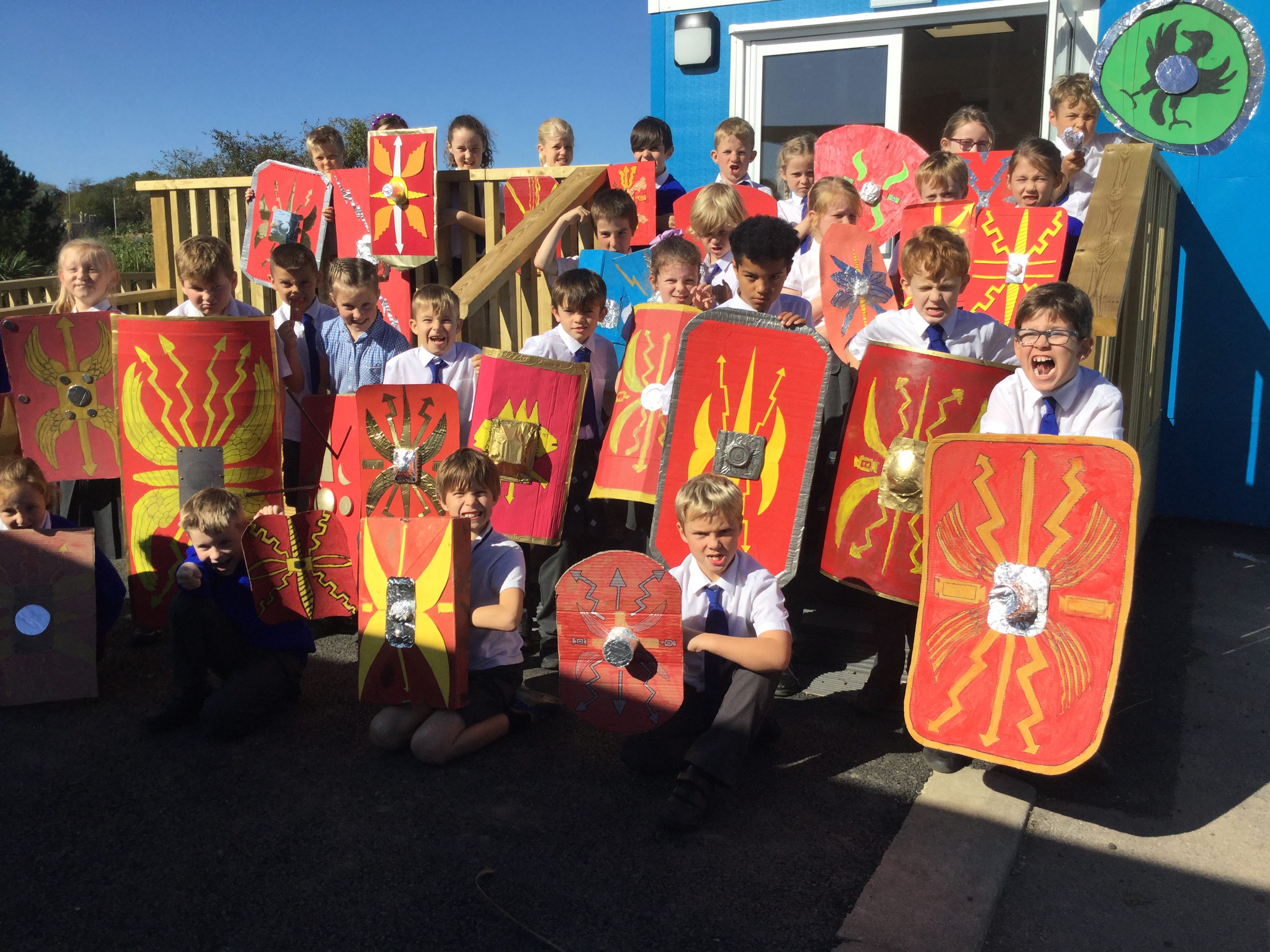 They look amazing in the classroom and some have even been used in Roman Army marching drills. The teachers would like to thank everyone who helped the children create these fabulous shields and we look forward to the products of the next challenge. 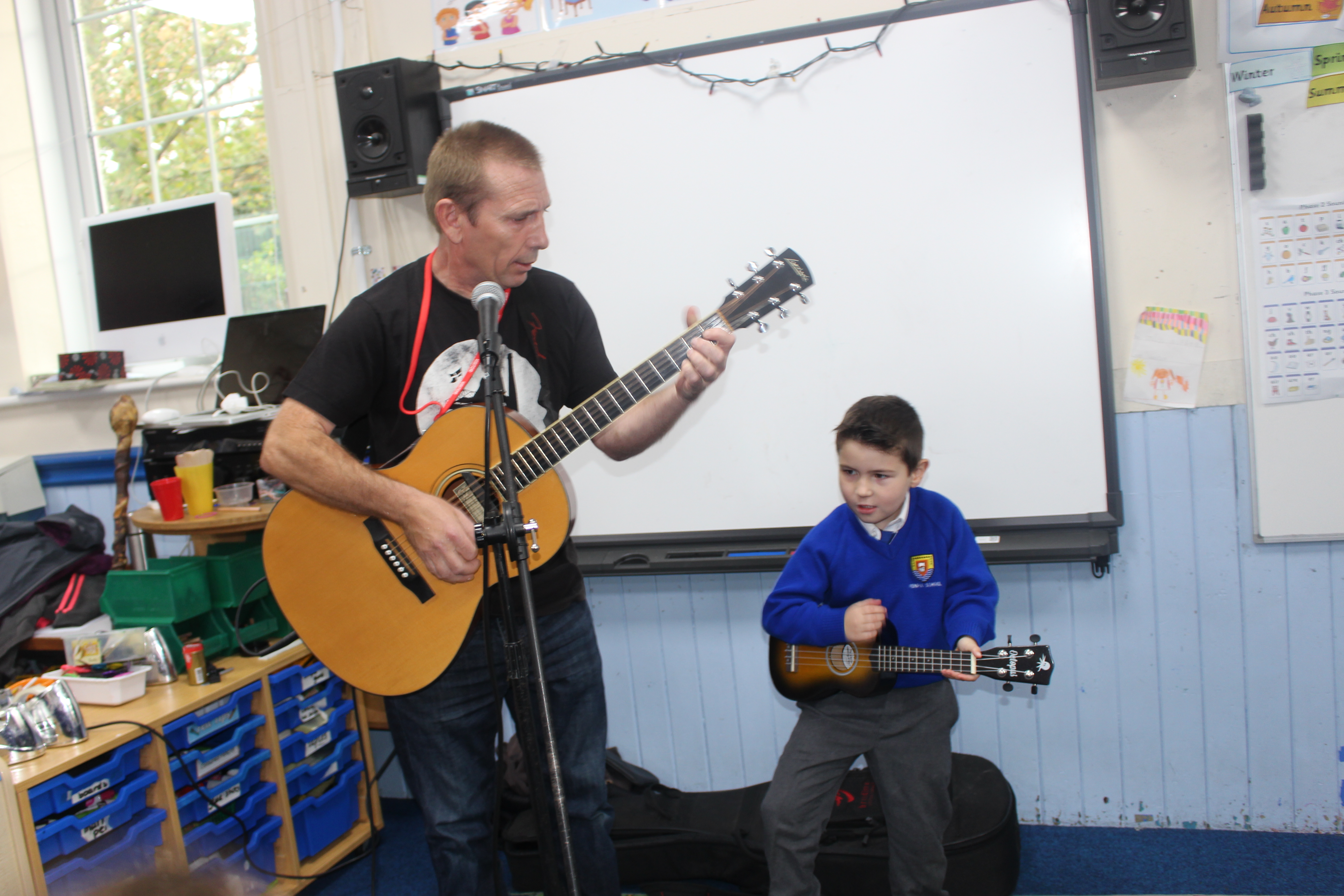 Hector from Class 1 and his Dad Angus rocked the reception class with their fabulous music.

He joined his Dad for one track of the set and the duo complimented each others music style really well.

Daddy was good. He plays horsey music, he brought his guitar and an amplifier which makes Daddy’s music go louder. He sung through a microphone. His singing was very good. – Hector

The children really enjoyed having a go with the microphone and one by one they said their names. The were fascinated to hear how their voices sounded through the amplifier.

I said my name through the microphone. It made it go louder. – Evie

The children then got the opportunity to play some instruments and jam along with Angus.

I played the bell instrument then we had to change over and I played one you press and it dings. – Enya

Finally we danced away to the cool tunes and really enjoyed dancing in time to the music, especially when it got faster and slower.

I liked dancing to the music – Harry 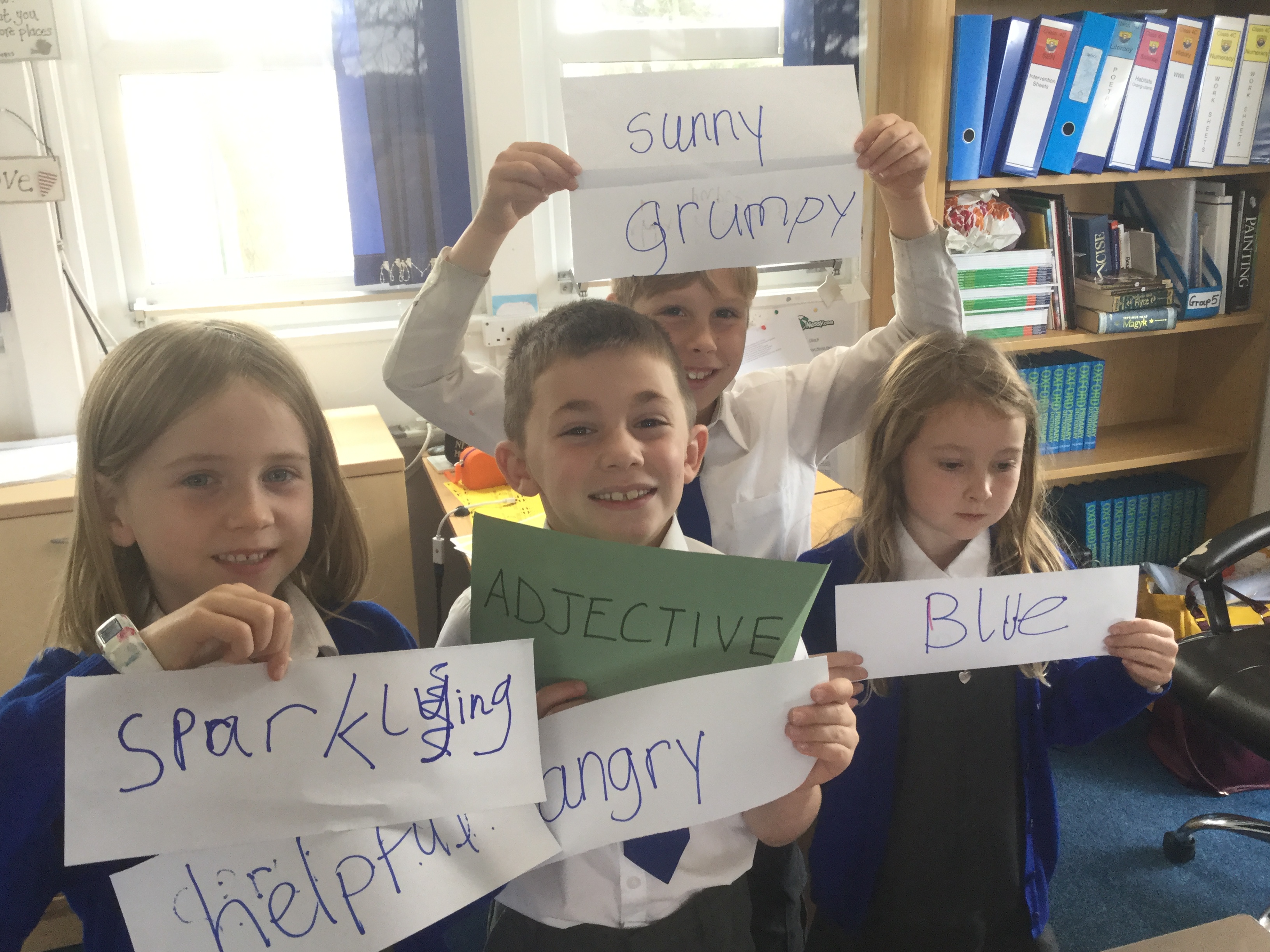 After the teachers in Lower Key Stage Two participated in an inspiring training session, Year Three and Four have been focussing on grammar this week. Each class have been doing fun grammar games and activities.

In class eight, the children have been recapping word classes. The children needed to know what verbs, adverbs, adjectives, nouns and proper nouns are. Each group of children wrote down a word of a certain type and made human sentences, discussing and discovering what happens when words are moved about. We also learnt that if you start a sentence with an adverb, we call it a fronted adverbial. 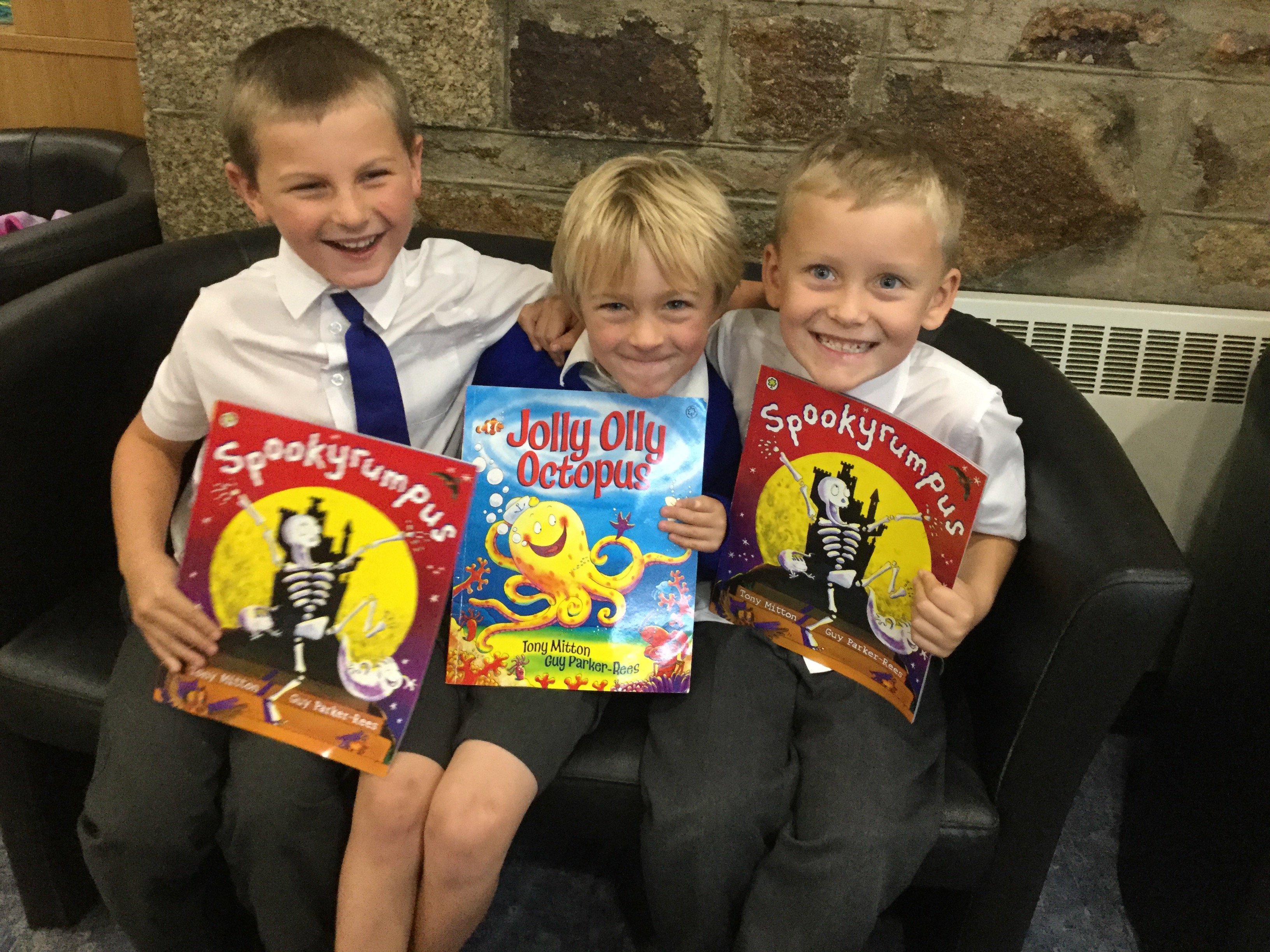 A huge congratulations to Bruce, Zak and Ted from Class 4. They decided to take on the reading challenge in class 4 – to read as often as you can at home and climb the reading ladder. The boys successfully reached the top of the ladder by half term and all received a book of their choice. A fantastic effort boys, well done!

Miss Ryan set us a challenge. You had to read at home every night and if you did, you would climb up the reading ladder. I was the first one to get to the top and I got a prize. I was really happy. I read 39 times at home and I was star of the week.

Infant Star of the Week

The overall star of the week for the infants this week is Bruce from class 4. Bruce is such a hard worker at home and at school. He has read 39 times at home and is the first person to reach the top of our reading ladder. Well-done Bruce. I hope you enjoy your prize. He also got all of his spellings right in this weeks spelling test! Fantastic effort Bruce, keep it up!

Junior Star of the Week

Junior Star of the Week is Harry from Class 10

I am delighted to give junior star of the week to Harry Blewett! Over the last half term Harry has grown in confidence and there is never a day where Harry doesn’t have a smile that spreads across his face! He is also eager to answer questions and take part in all aspects of school life and has an amazing attitude towards his work, always trying his best without fuss. Harry has been working on his spellings and 3 Minute Maths, which has seen him excel through the different levels! I am so proud of you Harry! Keep it up 🙂 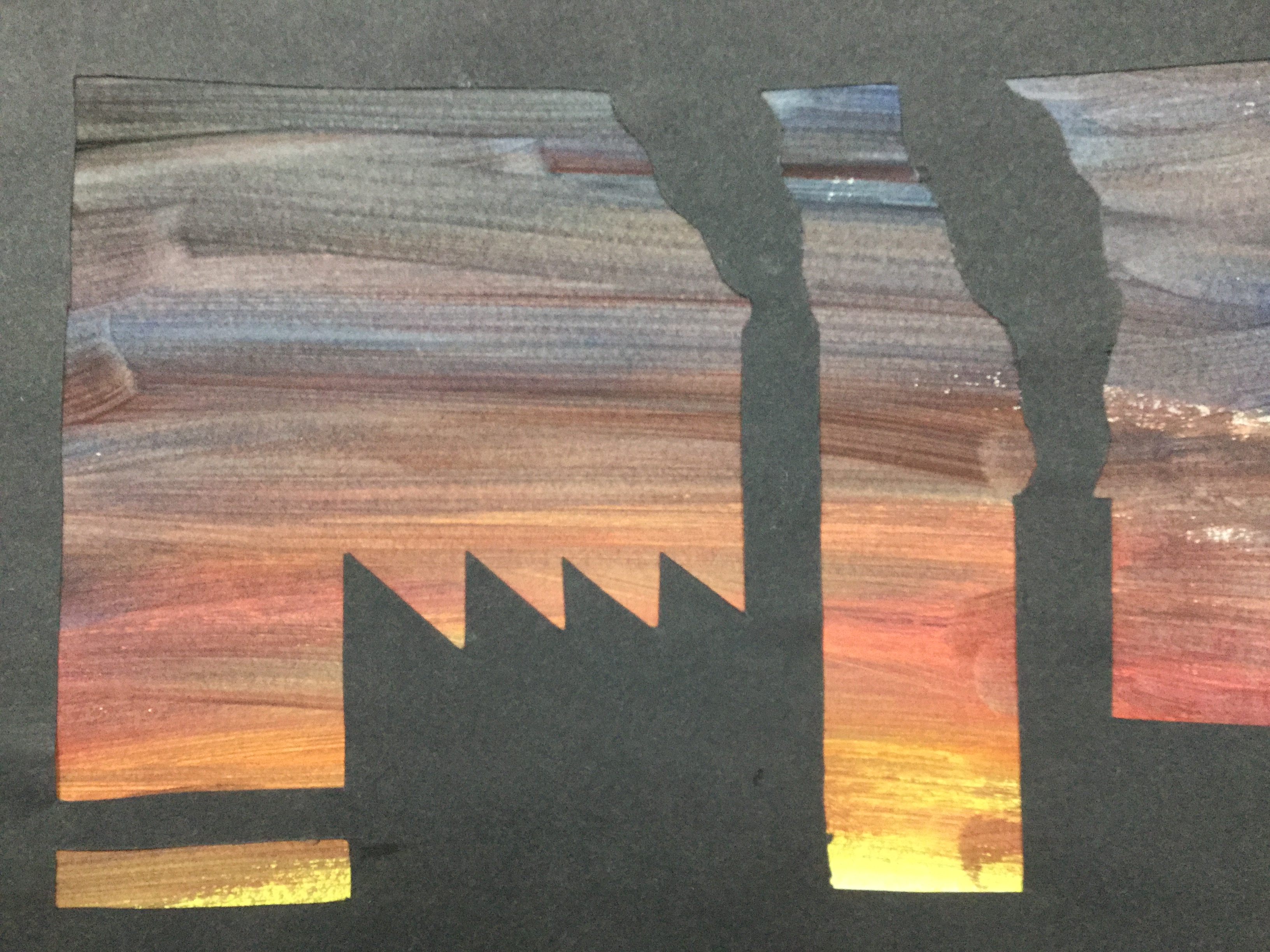 Our Year 5 classes have been studying the Industrial Revolution over the last half term. They have looked in depth at inventor and inventions as well as it’s effect on the modern world.

I’ve really enjoyed researching inventors because it shows how important the Cornish are!

The children have been undertaking their own research on the 6 main factors: population, agriculture, factories, power, transport and empire as well as researching an inventor of their choice including Humphry Davy, George Stephenson and Richard Trevithick. Once cumulated the children used these notes and facts to plan and create a biography so they can share their research with each other and parents at home.

I found it amazing that George Stephenson made the first train, especially after teaching himself to read and write!

The Industrial Revolution has also provided inspiration for some wonderful art. The children studied the painting ‘Coalbrookdale By Night’ which was painted by Philip James de Loutherbourg in 1801, in the heart of the revolution, before creating their own.

Using paints and water the children created a wash to represent the fiery sky before designing and cutting out an industrial themed silhouette to lay on top.

Between the 49 children in year 5 they have produced some breath taking pieced of art work that can be seen on display outside of classes 11 and 12 but also in their topic books. 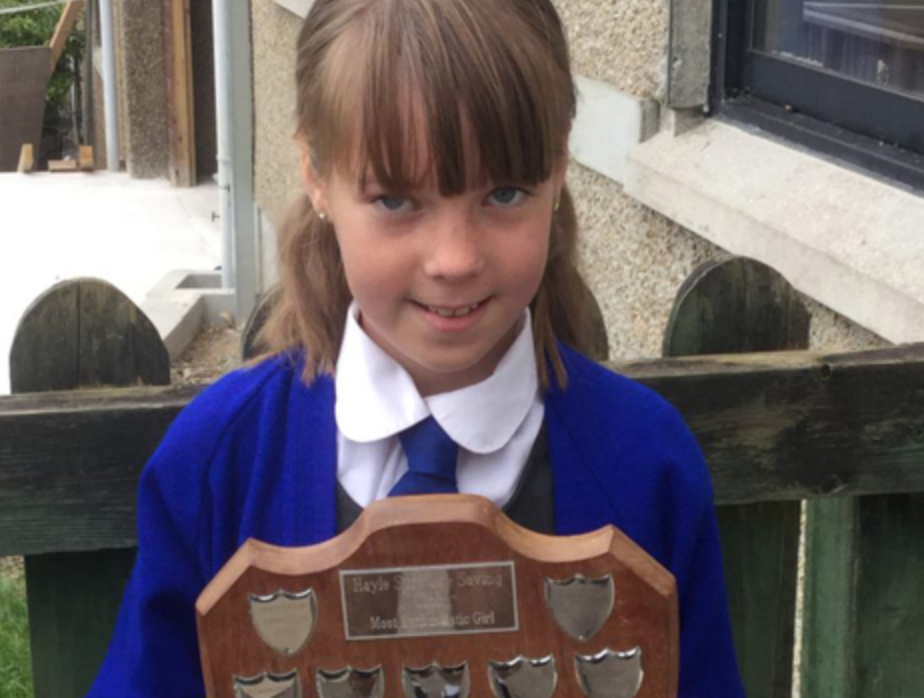 Many of our children are members of the hugely successful and popular Surf lifesaving club in Hayle, which is fantastic. However, Zara (Class 11) was awarded this shield for being the ‘Most Enthusiastic Girl.’

It is always a pleasure to see our children awarded for their sporting achievement, however is much more pleasing to see them winning them for the attributes they possess. Skills such as determination, persistence, perseverance, communication , teamwork and in Zara’s case, enthusiasm, and trust me she has bags of it!

What a great achievement, well done! 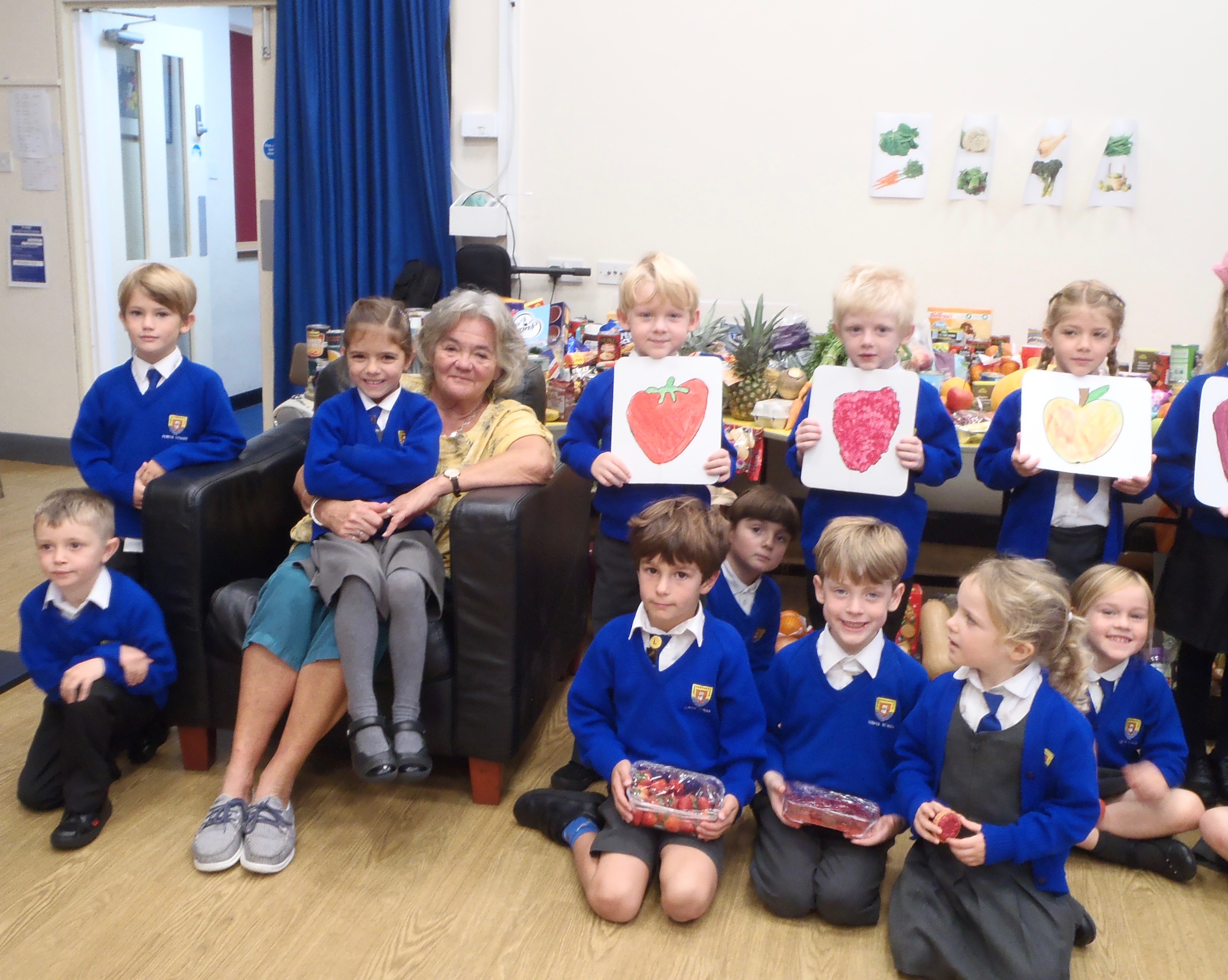 We were all very sad to say farewell to Michèle our amazing French teacher after 16 years of fun French lessons in all classes throughout the school. Michèle managed to encourage children to speak French with confidence by participating in relaxed games, songs, plays and even a fashion show.

At this years Harvest Festival Michèle took centre stage while everyone sang “Fraise et Fromboise” her own song about our love of fruit. The children looked forward to her lessons and she will be sorely missed.

Thank you for teaching us about colours and numbers – Imogen.

We loved the french songs – Louis.

The health and wellbeing of all our pupils is a priority at Penpol school. All infants are provided with a free healthy snack each day and given plenty of opportunities to exercise and keep fit. We start the day with “Wake up shake up” and regularly jump, climb and roll.

I can hang on to the ladder. I am brave and strong – Ethan.

I can climb up the rope – Teddy.