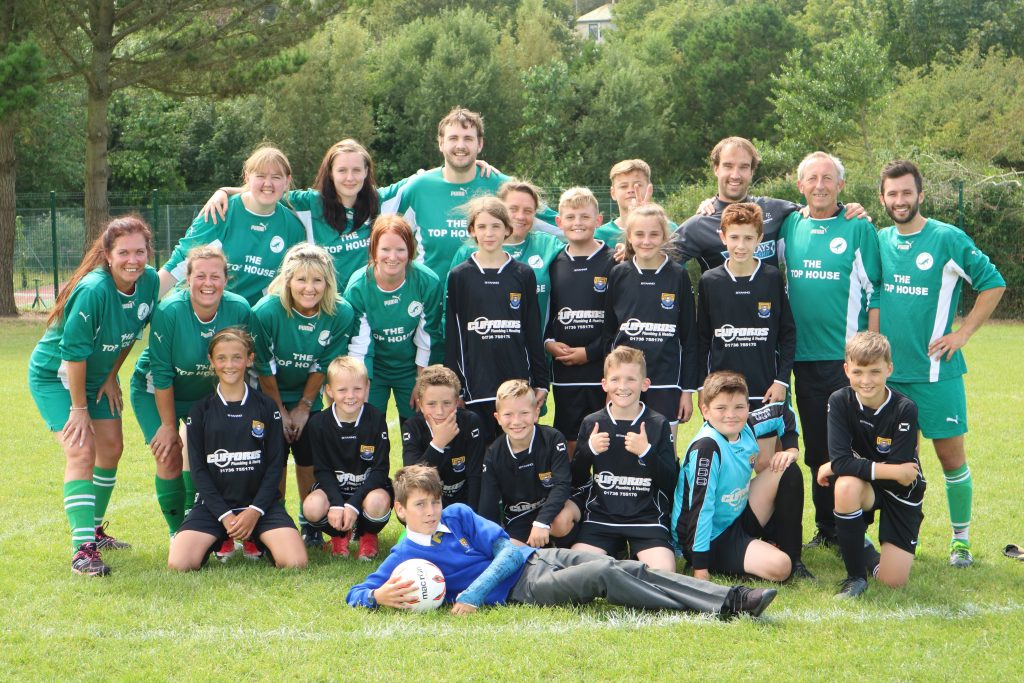 Thursday afternoon brought about the much anticipated Staff vs Football team football match and a fine end to the season it was.

With both teams kitted, warmed up, mentally prepared and awaiting the whistle, kick off was delayed due to a freak thunder storm. The weather gods are obviously football fans and were rooting for the children as the wet pitch then suited their passing style of play. Unfortunately for them, nobody told the adults as the pre-match favourites raced into an early lead. After some excellent Lampard-esque work in midfield Mrs Smart released Mr Stanlake to race through and finish past the onrushing ‘keeper. With the staff thinking the game was won they foolishly took their ‘foot of the pedal’ and were immediately pegged back as Finn played Ben through who duly fired past Mr Pollard in goal. His shot rocketed past the flat footed goal keeper ricocheting off the far past and nestling in the back of the net.

Some stubborn defending from Mrs Loughlin and the staff team’s mountainous central defender, Mr Woolcock, ensured the score remained level with the children’s attacks being limited to pot shots from distance to which Mr Pollard was equal to if not better. As the game neared its midpoint the teams looked destined to be tied however a quick fire double from the staff ensured this wasn’t the case. Naomi grabbed her debut goal with a very smart left footed finish after being set free my Miss Clarey’s fleet footed midfield play before Mr Stanlake netted his second, must to the disappointment of the mostly child supporting crowd.

Credit must go to the School team’s ‘gaffa as his team talk certainly worked. Jake would have been playing beside Jake must have delivered some precise instructions to prevent Miss Nidds and Caroline from running the midfield. Dylan and Jowan began to press higher up the field allowing Ethan and Josh to spread the ball with great joy.  Releasing both Charlie and Ben to grab their first and second goals respectively and continue their season of free flowing goal scoring. With the game now tied at 3 goals a piece it settled into a far tenser affair.

A reshuffle in the staff formation from player/manager Mr Pollard proved to be the breakthrough. Combining Mr Little swapping his whistle for his playing shirt and with the introduction of Lady Turner’s combative style the staff had a very good platform to attack from. From an attacking throw in on the left wing Caroline sent on-loan striker Ethan towards goal where he calmly slotted past the isolated Riley in goal. Nervous that the flood gates had opened Riley began to show the form that has earned him the Golden Glove with smart saves from Naomi, Mrs Chapman and a wayward goal kick from Mr Pollard. However, it wasn’t just the youngster drawing attention to his goal keeping ability. Mr Pollard rolled back the years with a handful of acrobatic saves including a cat like reflex s from Ethan’s deflected effort that would have has the scouts of Plymouth Argyle busily bustling for his signature. It was at this point the game could have swung in the children’s favour but for brave defending from Mrs Chapman and Mrs Loughlin whose competitive streak is mirrored by her son Dylan on the opposing team.

As the game neared its final quarter fatigue began to be an issue for the staff team and the rolling substitutions allowed the children to strike through the disorganised defensive set up on show. First through Charlie as a freak bobble left ‘keeper Mr Pollard red faced and on the look out for grounds man Mr Wells. The children’s jubilation was short lived as a clipped ball straight form kick off was flicked on by the experienced head of Mr Little to allow Ethan, on work experience from St Ives School, to poke past reserve keeper Leo.

The match soon descended from a tactical featherweight bout into a heavyweight slogging match as both teams exchanged dangerous attacks, but excellent goal keeping and resolute defending from skipper Josh and a very brave block from Erin prevented a cricket score. The game needed a spark and it was provided by an attacking run from Mr Stanlake who picked up a short ball from the goalkeeper before setting off on a run that Messi would have been proud of – ebbing and flowing between defenders as if they were banks of sand in the Hayle Estuary – before smashing the ball home at the near post. With the minutes left on the clock the goals began to fly in- 3 in 2 minutes. First it was Charlie securing his hat trick after a trademark run, using his strength the brush Caroline aside before flashing his shot past the goalkeeper but again they were immediately pegged back by the cultured left foot of Mr Little as he feigned the goalkeeper before rifling high into the net. Next came a rush of blood to the head from Mr Stanlake as he conceded a late penalty for what he claimed was accidental handball. Step up Emmeline, who had the chance to bring her team to within one. Her first attempt was powerful, but straight at stand in keeper Mr Woolcock. However, as the ball rebounded she took a touch and dispatched with power as her shot deflected in off the goalkeeper. 7-6!  Game on. With the children buoyed with the idea of drawing if not winning they continued to attack. Unfortunately for them the ever competitive Mr Stanlake had other things on his mind. A pinpoint pass from Mrs Chapman found Mr Stanlake who controlled and turned before curling into the bottom corner to complete the goal scoring. In truth it was a game closer than most of the staff had envisaged and played with an exceptional level of sportsmanship, mostly from the children. Well done to everyone involved and until next year, the trophy shall sit proudly in the staffroom. 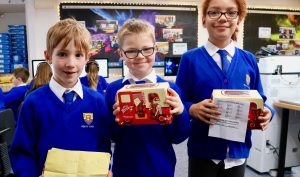 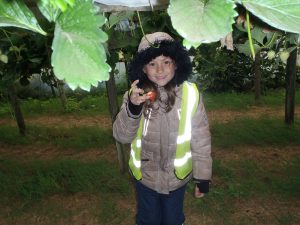 Class 6 will not be beaten by the weather! 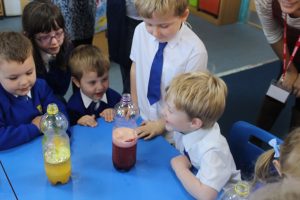 Year 4 embrace the return back to school! 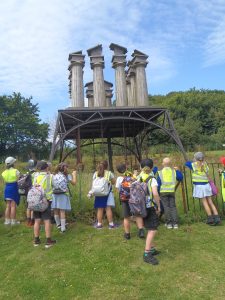