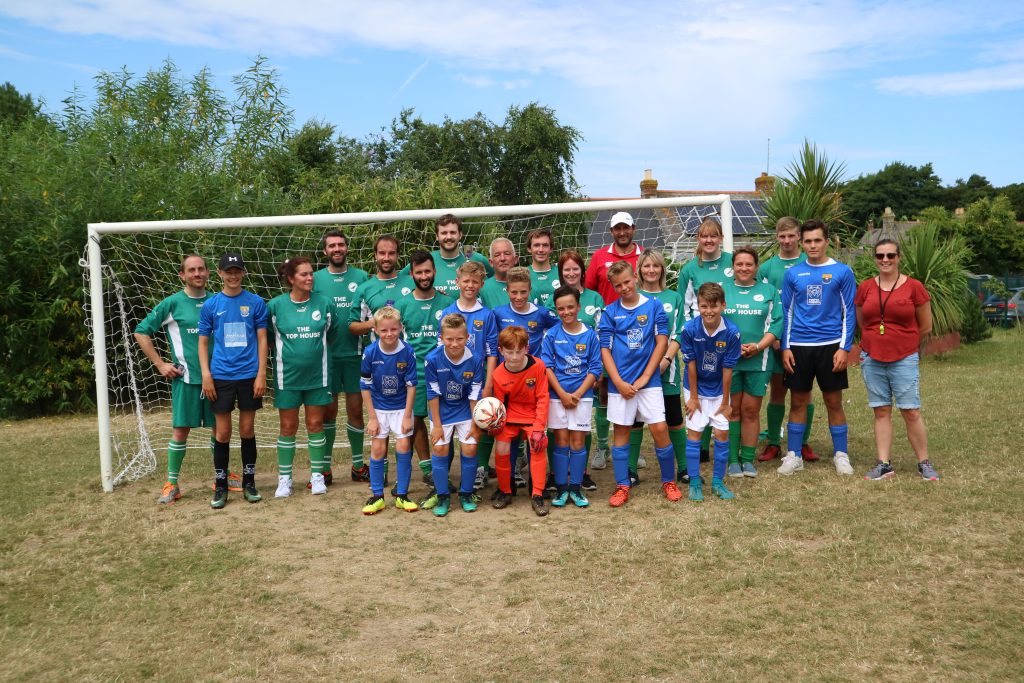 The much anticipated staff vs students football match did not disappoint. After a cagey first half, the game finished with a total of 7 goals, 8 less than last years affair. The staff were expecting a difficult challenge this year following the children successes over the season and they didn’t have to wait long for the inevitable. After a very slick move from Luca and Charley, Finn raced through to slot the ball calmly between the legs of debutant goal keeper, Mr Peck. Once Mr Peck had loosened his limbs and tied his laces, he was forced into action again, pulling off a fine save from Freddie. The staff struggled to make their possession count with Mr Pollard and skipper, Mr Wells (who was captaining the side for the first time) combined well but struggled to find a way past Jack and Dylan in defence. Then a fine ball from another debutant Mr Jones fell to the feet of Mrs Loughlin in the box, before she controlled it and fired it goalwards with just one swing of her left foot. A fine shot, matched and bettered by a diving save from Caden in goal for the children.

With the staff starting to settle into some kind of rhythm they were pegged back again as the students took another step towards victory when Charley calmly slotted away a penalty after he was upended by a robust challenge from the effervescent Mr Pollard. The staff needed to find a break through and after immense pressure from Mrs Smart and Mr Jones the ball fell to the feet of Mr Stanlake, who stepped infield and blasted a right footed rocket from distance into what the children will call ‘top bins’. This proved to be the spark to the games fire. It turned into a  fraught affair, with Mr Wise calling it a “ding-dong battle, I’d have been happy to pay to watch”.

The attacks came thick and fast from both sides but some resolute defending kept the score at 2-1 until a strong tackle from Miss ‘Nidiniho’ Nidds send Mr Chislett, another debutant, down the left wing, his clipped cross found the head of the 4th debutant named in the match day squad, Mr Emery who headed home into the students net to level the scores. As the half time whistle neared the staff had an opportunity to take a lead into the break but Mr Emery failed to add to his earlier goal after Mr Stanlake sent Ross for a hotdog down the left wing. Ross was making his second appearance for the students 4 years since his last alongside Jack J, both of whom had unsuccessful trials for the staff during their week on work experience.

The half time break brought the opportunity for tactics and oranges. A string of changes at half time for the staff disrupted the students passing style, but they persevered and trusted their ability to pass the ball out from the back, a tactic that has served them so well this season as they were crowned county champions. It was the introduction of Jack for the students that seemed to buoy them, on loan from Hayle Academy, he slid straight into an already strong and competent back 3. The students began to take confidence in the possession they were becoming too familiar with. Mr Stanlake then clipped the ball towards the back post where Mr Pollard was making his presence felt. The pressure he applied to the student defence forced Jack J into making an error which he always looked susceptible to make. His nervous header looped over Caden and settled into the students net. The staff took the lead for the first time in the match much to the disappointment of the student supporting crowd. Mr Pollard’s job outfield was done as he subbed for goal keeper Mr Peck. The moment had come for the introduction of the combative pair of Caroline and Lady Turner for the staff. The destructive style of this pair in defence was complimented by the guile and calmness of Mr Woolcock who controlled the ball at the back like a young Paulo Maldini. A strong tackle form Lady T led to the award of a freekick, the dissent that followed led to her name being the first to enter the book. She was soon joined by Mr Emery whose rash tackle gifted a very good opportunity for the student to level the scores. Unfortunately for them, their well worked move didn’t materialise with Freddie shooting high over the bar.

With only minutes left on the clock Freddie made amends, some brilliant midfield play from Alfie allowed Freddie to play the ball through the confused and tiring defence to Charley who slid the ball past the new ‘keeper Mr Pollard who was sluggish off the line. 3-3.

The game was nearing its climax and neither team looked happy with a draw. The students kept knocking on the door, with Alfie striking from distance and Finn squandering a good chance. Mr Chislett then had a chance to win the game but Alfie ensured that wasn’t the case with some very brave defending. The staff at this stage were struggling to string passes together, Mr Peck playing some good one twos, only to not receive the return pass. The students had the ability and the confidence to keep the ball on the floor and pass to each others feet, making football look as simple a game as it should. This wasn’t the case for the adults.  The distribution from Mr Pollard seemed to be the answer as the staff decided to cut out middle of the pitch and resort to long ball football.

This would be the key that unlocked the children’s defence and ensured the trophy stayed in the hands of the staff as a long throw from Mr Pollard was flicked on by a clever head of Mr Emery. The bounce of the ball beat Jack and Dylan and allowed Mr Stanlake to rush through and take the headlines. 4-3 to the staff. A real cracker of a game.

The students however can take a huge amount of pride from their performance. They continued to display a very positive attitude and pass the ball simply. Enjoying their football like they have all season long.

Penpol Give Hockey A Go! 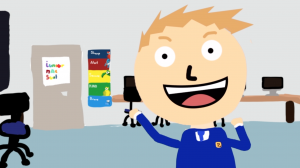 Class 12 create their own E-Safety animation! 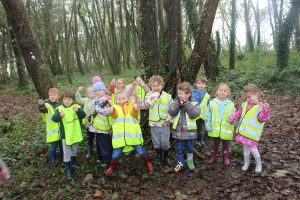